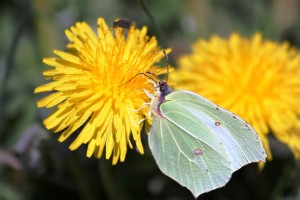 I walked the Ridgeway last week. It took me five days, going west to east. On the third day, in sun-soaked countryside somewhere close to the Oxfordshire/Berkshire border, I met a man hiking in the other direction. He was wearing only boots and a pair of shorts. He had a big rucksack, lots of white hair and a fabulous walrus moustache. “Hello!” he said, barely slowing his stride. “You’ll find lots of brimstones up ahead.”

“Ok,” I replied. I couldn’t remember what brimstones were. I then said “That’s good”, deciding brimstones were probably a positive thing but adding a tiny inflection of sarcasm in case they were something bad. He laughed politely. Then he was gone with a wave, and I looked up “brimstone” on my phone.  They were butterflies.

The next twenty minutes of walking were like passing through a soft confetti storm. Dozens of yellow wings flipped and dipped from verge to hedge and back again. I took this photo. That night I stayed at a farm. When I told the farmer’s wife about the brimstones she became very animated. “Oh!” she said. “They’re out are they?  Spring at last!”