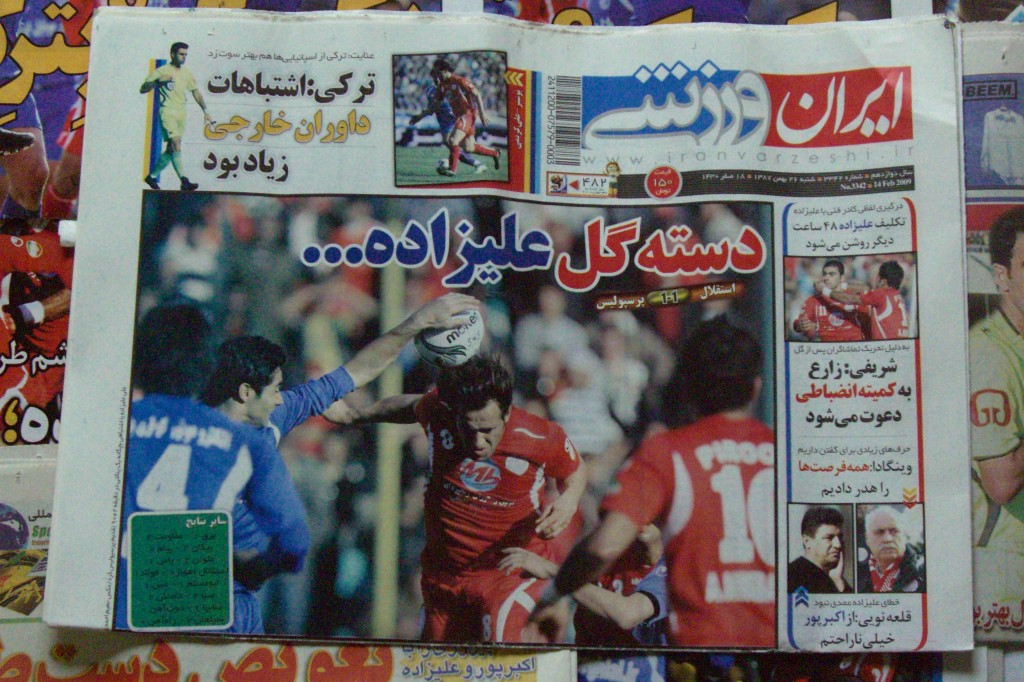 There’s been a lot of talk, evidence and insinuation of match-fixing in recent months. Football, cricket, even tennis. It’s monumentally depressing for any serious sports fan. It also puts me in mind of a match I attended in the Middle East a few years ago. I’d been sent out to Iran to cover the Tehran derby for FourFourTwo Magazine. The experience was fairly nuts (there was an all-male crowd of 95,000, many of whom had begun filing into the ground at 5.45am) but the match itself was chiefly notable for the suggestion of blatant engineering.

By way of context, the last four matches between the two teams, Esteghlal and Persepolis, had all finished 1-1.  The nudge-nudge theory I was given was that a drawn game meant (comparatively) less crowd trouble, so was favoured by the authorities.

Eighty minutes in, the blues of Esteghlal were 1-0 up. This is my account of the conclusion to the match. The handball in question is pictured above.

“The Persepolis supporters are becoming increasingly jittery – they’ve been here all day and want a result to show for it. With minutes to go, Esteghlal striker Siavash Akbarpour is presented with a simple one-on-one. It should be game over. He skies it. And as the clock rolls into injury time and desperation sets in, a Persepolis corner finds Ali Karimi’s head, which in turn finds the outstretched hand of Esteghlal’s Ali Alizadeh, substituted on just minutes earlier. It is the craziest of handballs. The referee has no option but to award a penalty, which is slotted home as the final whistle blows. For the fifth time running, the Tehran derby ends a goal apiece.

The flags left flying are red. Esteghlal fans begin ripping up seats and hurling them onto the pitch. Police rush sections of the crowd to calm them and, inevitably, skirmishes spill outside. While the vast majority of fans restrict their emotions to vocal expression, there are numerous arrests for violence (as many as 100, according to the next day’s press). “We want football, not politics”, goes up the chant. On the main road back into town, groups of youths on scooters square up to each other. In the eyes of the fans pouring home – particularly the blues – there seems little doubt they’ve been had.

The media fall-out begins in force the next day. Almost all papers splash with a photo of the handball, and headlines are accusatory. Iran Varzeshi leads with ‘The gift – a bouquet of flowers from Ali Alizadeh’. Donya Futbol reads ‘Alizadeh: the special envoy for the derby’, and Navad says simply: ‘Inevitable’.”

I’ve just looked up the last few results between Esteghlal and Persepolis.  Only three of the eight matches since the one described above have finished in draws. It’s nice to think of that as progress.