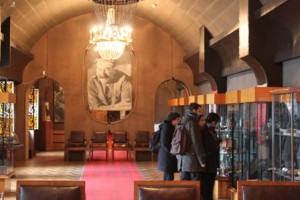 At some Kremlin-ordained moment in the late 1930s, a neighbourhood of simple brick houses was demolished in the Georgian city of Gori. One solitary residence was intentionally left standing. Directly from the front door of this unremarkable dwelling, an avenue of parks and trees was constructed, sweeping straight out for a mile or more towards the mud-brown Mtkvari River. Today the tiny house remains where it always has, and has the vantage point of a palace.

Why should a low flat-roofed cottage have provided the centrepiece for the rearrangement of an entire city centre? Simple enough.  It had nothing to do with its masonry or wonky wooden porch, and everything to do with the baby boy born there in 1879 – Josef Djugashvili, later to take the name Stalin. If it had witnessed the birth of the Great Leader, ran the diktat, it was by default a Great House.

Personality worship as a tool for town planning was no rarity in the Soviet era, but it didn’t often take such extreme form. Gori remains inseparable from the memory of its most infamous son, and until recently the city – only ninety minutes from capital Tbilisi – was seen as one of the last bastions of support for the man who even Lenin called “a coarse, brutish bully”.

But as generations pass, things alter. Seventeen metres of fresh air now occupy the spot in Gori’s central square where stood, until 2010, the last remaining major statue of Stalin in the former USSR. There was no fanfare surrounding its removal. Residents simply woke up one morning to find it gone. At around the same time, a new gallery was added to the large museum that stands directly behind the house of Stalin’s birth. This new gallery is worth remarking on because it deals with the manifold horrors of the gulag – the first time that the museum, long decried as hagiographic, has made an open admission of one of modern history’s darkest chapters.

“Yes, you can say that the relationship between Gori and Stalin has changed,” says museum guide Olga Topchisvili, as we wander through opulent halls of memorabilia and state gifts – pipes he smoked, fountain pens he filled, clogs from Holland, an ashtray from Britain. “A few of the very oldest people, some of them still respect him. Visitors find this hard to understand, but it’s true. But the younger people in Gori, no, they don’t like him at all.”

She has a trained way of straight-batting any leading questions (“You want to know why there is so little about Trotsky? Well, he had a situation. Now this next exhibit…”) but is otherwise surprisingly candid about the reality of Stalin’s legacy. This hasn’t always been the case. I’d heard tales of travellers leaving Gori in disgust after finding the museum seemingly staffed by flag-waving labour-camp apologists. It’s hard to say precisely what led to this shift in conscience, but it would seem that younger members of the Georgian authorities finally saw the glorification of one of the 20th century’s most despised figures as too great a source of embarrassment.

This more open attitude certainly chimes more clearly with the general experience of travelling through Georgia, a country intent on lavishing conversation, hospitality and homemade grape vodka on anyone with a rucksack. There’s a theory that Georgians are so welcoming to visitors who come in peace because they’ve been historically accustomed to being invaded by outsiders with more violent interests. I can state this: when you’ve spent the bus journey to Gori having boiled sweets repeatedly forced on you by a beaming nun, it’s hard to think of the place as lacking in heart.

At the city chess club, of all places, I fall into conversation with a middle-aged woman who teaches English. I mention that I’ve come from the museum, and in responding she sums up the weird attitude that pervaded past generations, a mindset that was testament as much as anything to the power of the Soviet propaganda machine. “The way the older generations felt towards Stalin, you know, it was very complicated, almost impossible to understand,” she explains. “People hated him but – he had a hold. My mother lost two brothers to the gulag and still cried hot tears when Stalin died. How do you explain something like that?”

Back at the museum, there remains a much smaller Stalin statue right outside the main doors ‘for display purposes’, but it lacks the bristling surety of most of his iconography. Rather than wearing the glare of a steel-fisted leader, this particular Uncle Joe has the decidedly troubled look of someone who’s watched the very last transport roll out of town.